A Faculty Report by Dr. Zach in her role as the Charles and Mary Sukup Endowed Artist in Organ is now available as a downloadable PDF by clicking here or on the image below. 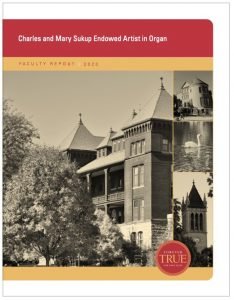 On 22 February 2020 Dr. Zach presented the 24th International Festival of Women Composers Concert at Martha-Ellen Tye Recital Hall in the Music Building of Iowa State University. See the program here or click on the image below. 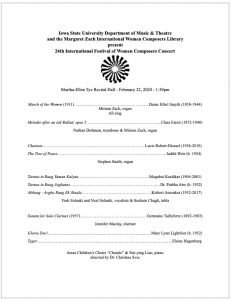 On 17 November 2019 Dr. Zach presented All Roads Lead to Johann Sebastian Bach, a concert featuring herself and students of her organ studio at Iowa State University’s Department of Music and Theatre. See the program here or click on the image below. 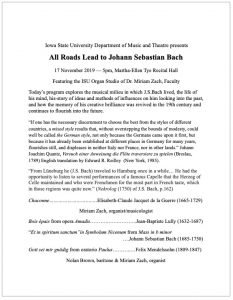 On 5 October 2019 Dr. Zach presented Written in Britain and Ireland, a program that “explores 19th- and 20th-century compositions by English, Irish, Scottish, and Welsh composers who were influenced by traditional songs, dances, people, and instruments of the British Isles and Ireland. See the program here or click on the image below. 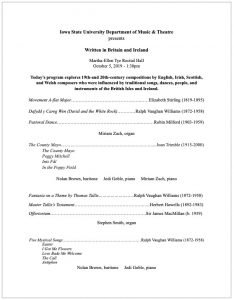 On 6 September 2019 Dr. Zach played a program of Eastern European Organ and Harspichord Music by Women Composers who were active during the Soviet Socialist Realism phase (1932-1988). See the program here or click the image below. 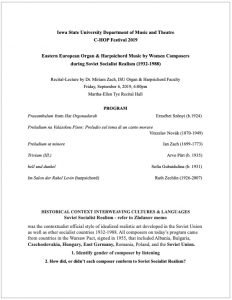 During the Fall of 2017 Dr. Zach taught two courses in the Music Department at Iowa State University: an Honors Seminar on Music &Health and Applied Music: Organ and Harpsichord. Previously she taught IDH 3931 Music and Health in the Honors Program (at the University of Florida) and HON 321 Resonance: Intersections Between Music And Architecture (at the Iowa State University Honors Program). Currently she is also teaching piano, organ, and harpsichord in her home studio in Ames. If you are interested in lessons, contact Dr. Zach here. She has taught piano at the Universität Bielefeld in Germany, and organ and harpsichord at the University of Florida.

Author of For the Birds: Women Composers’ Music History Speller, Volume 1 (Culicidae Press, Ames, IA: 2015). Available directly through the publisher or through Amazon.

Co-editor (with Dr. Mikesch Muecke) of a publication of essays by international scholars on issues about music and architecture. The book, Resonance: Essays on the Intersection of Music and Architecture is available now at Culicidae Press.

Publication about Opus 28, Emily, a house organ by A. David Moore at Obvious Press.

Dr. Zach has played Organ for the following denominations:


The Organ Music of Olivier Messiaen: The Evolution of its Style – Miriam Zach – April 18, 1991 University of Florida

For more information go to her Wikipedia entry.